A History of the Kingston Library

The Kingston Library was organized on February 12, 1899 when, at the invitation of Mrs. William Lawton, Grand Regent of the Wiltwyck Chapter of the Daughters of the American Revolution, a “book reception” was held in the Common Council Room at City Hall.

More than 300 people attended, contributing 300 books, many from their own collections, and $50. The Library received its Absolute Charter as an Association Library from the State of New York on June 26, 1899, and began operation in a second floor conference room at City Hall on October 7, 1899, where it remained for nearly five years. It was staffed by a librarian who earned $1 a day. Later an assistant, a Kingston Academy student, was hired increasing the payroll by 10 cents a day.

From its foundation the Library has benefited from the interest and generosity of benefactors. Local resident Samuel D. Coykendall, President of the Cornell Steamboat Company, and steel magnate Andrew Carnegie played major roles in the Library’s development. Myron J Michael, first Secretary of the Library Board of Trustees, was instrumental in obtaining a $30,000 gift from Andrew Carnegie to build the Library. The gift was secured when the Common Council voted to appropriate $3,000 annually, 10% of the Carnegie gift, for support and maintenance of the Library, and S.D. Coykendall made an offer of property, with the stipulation that the Trustees raise $2500 toward its purchase price. The Carnegie Library was built on this property on Broadway, opposite City Hall, and opened on February 12, 1904. Of classical design and constructed of narrow brick and stone, this beautiful building, by its architecture and location, established the Library as an institution of importance in the community.

In 1922, an installation of steel book stacks with steel stairs was donated to the library in the will of Mrs. Lizzie (William) Lawton. The gift was known as the “Lawton Alcove” and held 7,000 books.

By the 1930s the director’s annual reports were reflecting change: while the library had reached its highest circulation levels during the later Depression years, a state survey of 1937 commending the library staff for “good spirit and effort” also specifically criticized the library for being “understaffed, underfunded, and overcrowded,” conditions which persisted over the years.

During the 1950s, the Library would join the Mid-Hudson Library System, add a Children’s Librarian and a Reference Librarian, both part-time, and establish a separate children’s collection which moved downstairs to the basement which already housed the fiction and music collections — sheet music! — a walk-in vault, and the Library Office where the Director, the bookkeeper, technical processing and the newly hired reference librarian all worked in the same room with one phone line.

The 1960s saw a period of growth and innovation. The Kingston school district, which had expanded from a City School District to a Consolidated District in 1958, absorbing the student populations of surrounding one room school houses, began contributing to the financial support of the Library. During this period the Library became known as The Kingston Area Library. The collection started to grow, with more emphasis on non-fiction than previously, expanding to include phonograph records and microfilm. Circulation and registration were up, and a bookmobile was tried, but the challenges of inadequate parking and maintaining adequate security persisted.

Interest and involvement of local service organizations had a huge impact on the direction of library growth during this period. Two adjoining properties, the O’Reilly house on the corner of Broadway and Andrew Street and the structure immediately adjacent on Andrew Street were acquired by the Library with funds from the Lions Club of Kingston. The Andrew Street structure was demolished, making room for additional onsite parking, and the turreted Victorian O’Reilly house was renovated to house the Children’s Library and the growing local history collection. In the autumn of 1975 the Children’s Library was destroyed by a disastrous fire. Arson was suspected, though never proved. Once again, local supporters came to the rescue. Triage on what remained of the Children’s collection was done by the staff, and salvaged material moved to donated loft space in the Canfield building where teams of volunteers worked with Library staff to restore the damaged books. Benefactor John Schultz offered space in the Millard Building where the Children’s Library made its temporary home in two rooms on the second floor. This unforeseen turn of events intensified the search for a new location for the Library. Among the sites considered was the Sojourner Truth School building on Franklin Street in Mid-town Kingston. Erected in 1878 and formerly called School Number 8, the building was slated to be vacated by the Kingston School District. An arrangement was reached to the mutual benefit of both the District and the Library whereby the Library would relocate to Franklin Street with a 99-ýear lease on the property. The rent was one dollar a year, and the Library agreed to bear the expense of renovation and maintenance of the building. The School District purchased the Carnegie Library building and property from the Library Association. 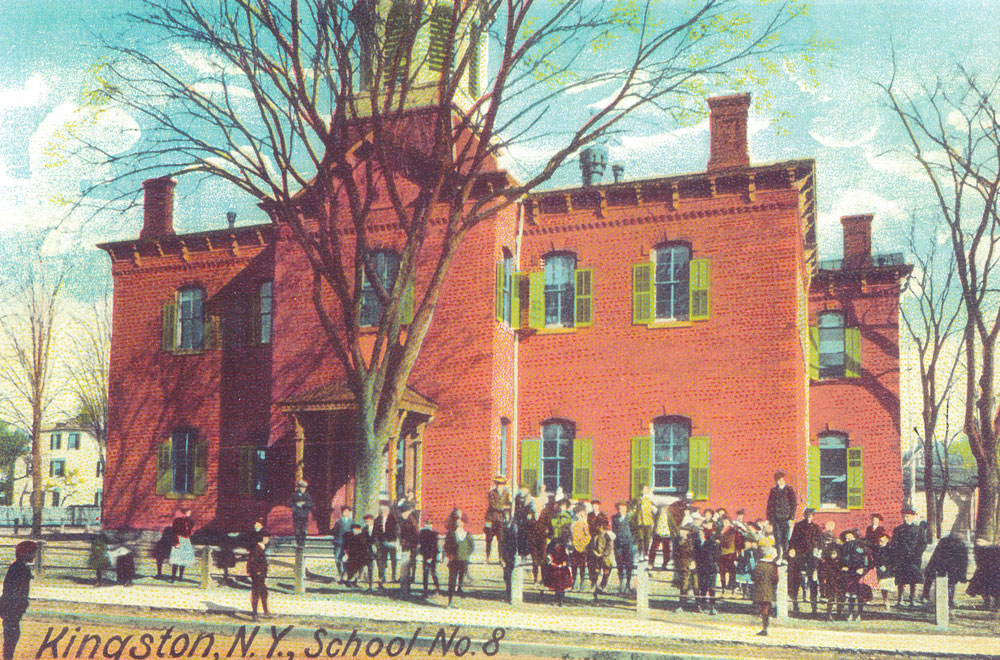 Plans for the conversion of the Sojourner Truth School to the Kingston Area Library were drawn by local architect John McCullough. The new one block square site on Franklin Street between Prospect and Furnace Street offered ample onsite parking. The large brick two-story building was reconfigured to house first floor reading and reference rooms, an elevator, a large Community Room, staff offices, and a large Children’s Library on the 2nd floor staffed by a full-time children’s librarian. Costs of the renovation were covered by the sale of the Carnegie Library, the insurance settlement, and fundraising by the Library Association. This transformation from antiquated school building into a spacious, modern Library was overseen by Carolyn Matzen, Library Director from 1969 to 1994.

The actual move from Broadway to Franklin Street took place on the weekend of March 18, 1978, with the help of National Guard Reserves from the 854th Engineers Co. US Army, a truck from Davenport Farms, and teams of local volunteers and library staff transferring the collection. Half the staff boxed the books at the Carnegie building; half shelved them in the new building.

Once established in its new location the Library continued to flourish, registering new patrons at the greatest rate in its history the following year, and expanding and enhancing its range of services over the years. A very popular local history room was renovated by The Friends of Historic Kingston. The bare tarmac parking lot gradually became more compatible with the surrounding residential neighborhood as a Library Reading Garden grew up around it thanks to the horticultural talents of George Allen, Reference Librarian, who succeeded Carolyn Matzen as Library Director. Diverse local organizations meet in the Community Room. The Kingston Bridge Club and the American Association of University Women have held regular meetings here for years.

The Children’s Library offers a wide variety of programs for all ages including weekly story hours, the Summer Reading Program, Origami Club and Super Saturdays. Begun in the early 1990’s as a Grant Project of the Kingston Junior League, Super Saturdays remains, year after year, the most popular program the library offers. Another program initiated in the early 90’s, the Read and Write program, addresses a need of the neighborhood community by offering a free after-school program focusing on completion of daily homework assignments and development of reading and writing skills. Originating as a Community Development grant and for years funded by the Library, the program is now independently funded and continues to operate at the Library.

Participation in the Mid-Hudson Library Association has offered continued support and benefits. The Job Center, part of the MHLA adult learning program, operated from 1976 to 2000. The Library also was designated Ulster County Reference Center and was the first library in the Mid-Hudson System to have an automated circulation system beginning with a locally written program in 1984. 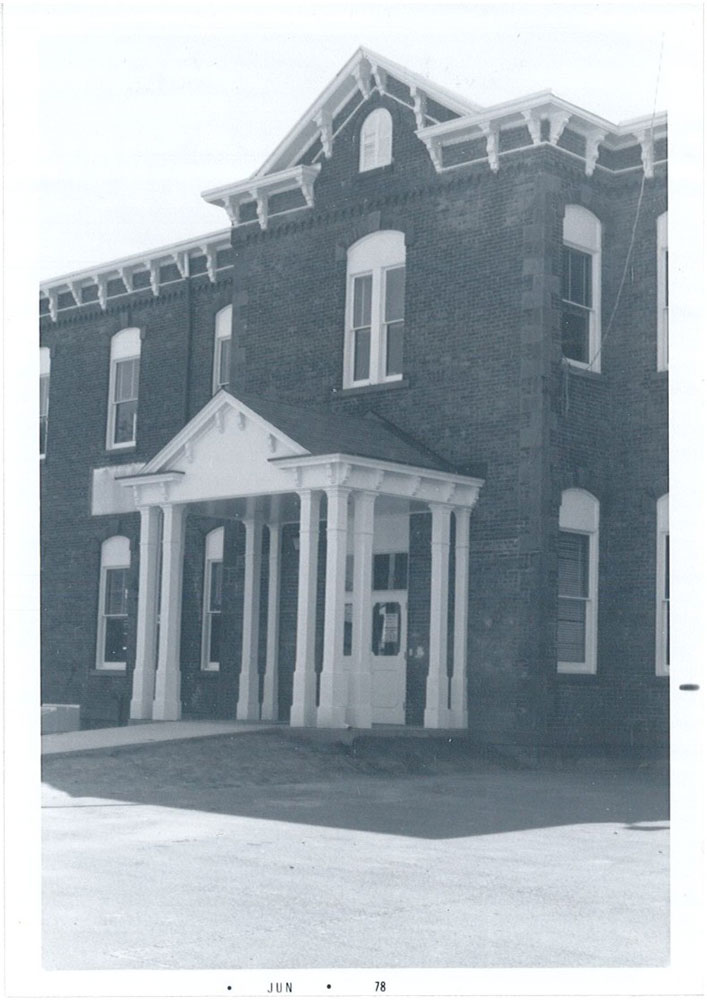 From its beginnings in 1899 when book circulation was the be all and end all of the Library’s existence, its Charter as an Association Library carried no financial guarantees and the Library always survived. Association membership by prominent local citizens and patrons, and volunteer efforts by the Friends group contributed heavily to library support. In the last quarter of the 20th century cultural shifts and technological advances, unimaginable in earlier times, expanded library services far beyond the capacity of Association support. Projected annual budgets reached $300,000, one hundred times the local support guarantee of the Carnegie agreement. A change from Association to Special Tax District Library, long in discussion and planning, was presented to City of Kingston voters in June 2000 winning overwhelming support.

Known once again as The Kingston Library and directed by a Board of nine publicly elected trustees, and with any annual budget increase subject to public approval, the Library has embarked upon its second century of operations with a newly developed Five Year Plan of Service and the appointment of Bruce George as new Library Director. 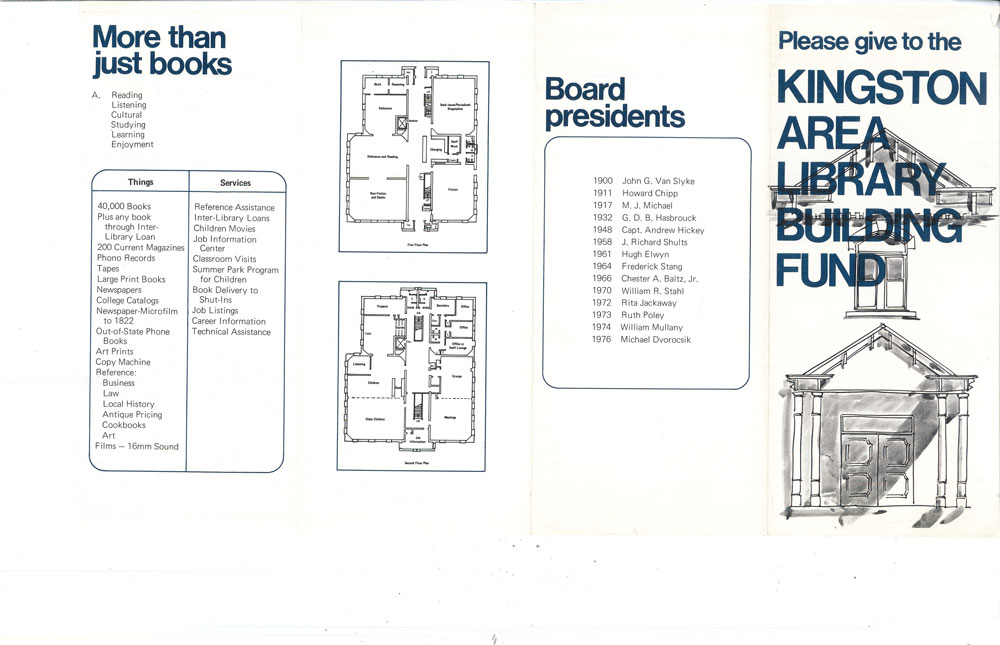 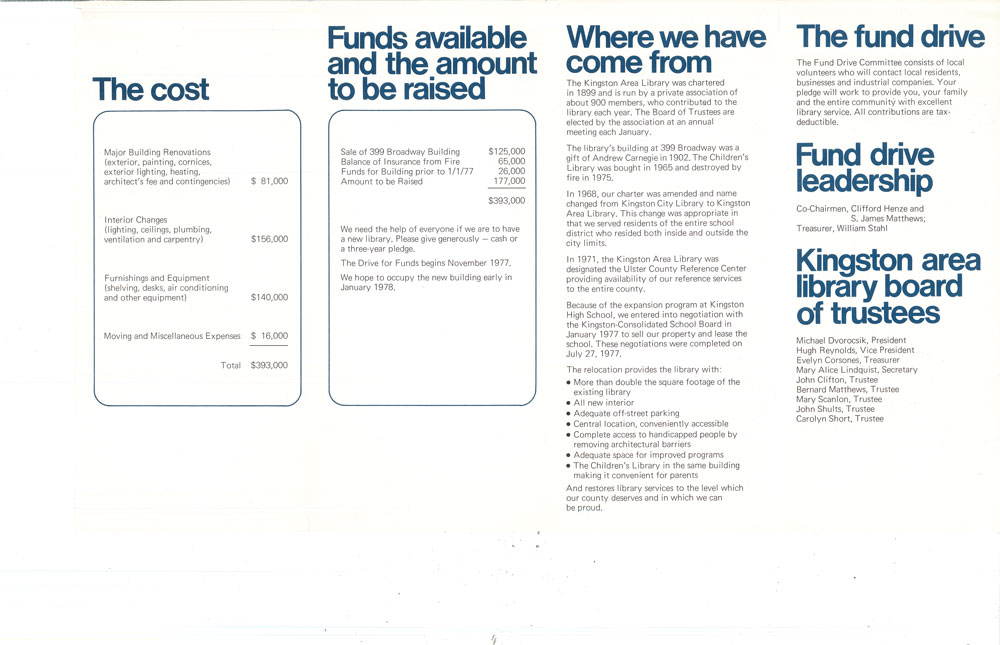 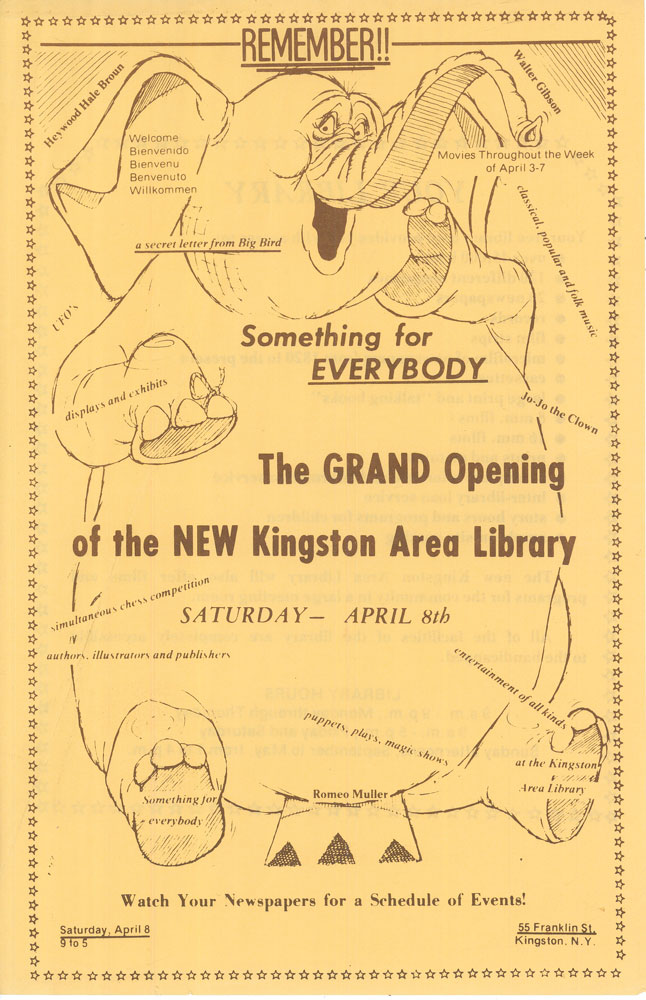 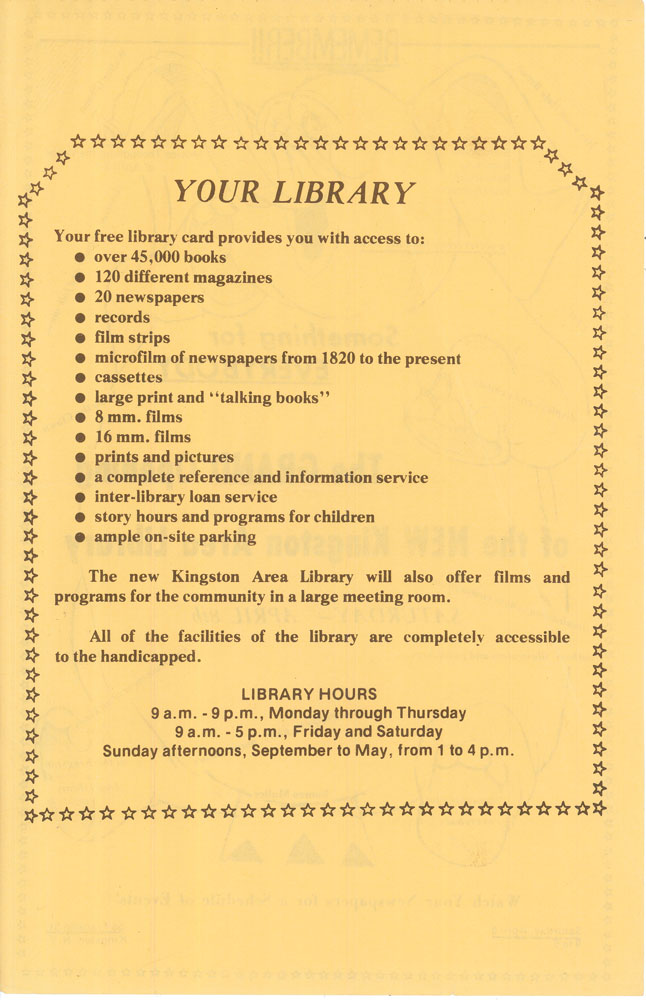